It was the third group working with the refugees and asylum seekers…I have not found it the easiest group mainly because of the language difficulties, but also because people turn up to the centre to simply get support with practical issues they are facing, so when they see a creative group happening that they no nothing about they are understandably not interested in engaging. So i have felt that I`ve been split between engaging the group members who come every week and trying to engage new people who turn up to the centre. I have become less concerned about engaging new people who turn up, instead I have been welcoming them with a cup of tea and leaving it up to them to show an interest in the group or not.

The group members who do come every week turn up throughout the group, so it`s difficult to start and finish any activity together; each person ends up at a different stage. This means explaining the activity about ten times during the session, as each group member turns up. This process of having to repeat myself feels really draining for me and I wonder about the impact on the group? It leaves me wondering about boundaries (not for the first time), whether it would be better to be stricter about the time the group started, but this would mean losing a lot of participants. Is it better that they turn up when they can and engage?

However despite these difficulties, for the first time since working with the group it felt like we had time where we were working as a group experimenting and playing with ideas together. This felt so calming and people commented how “therapeutic” it felt. The activity didn`t involve many instructions, which I think really helped create this flow within the group. 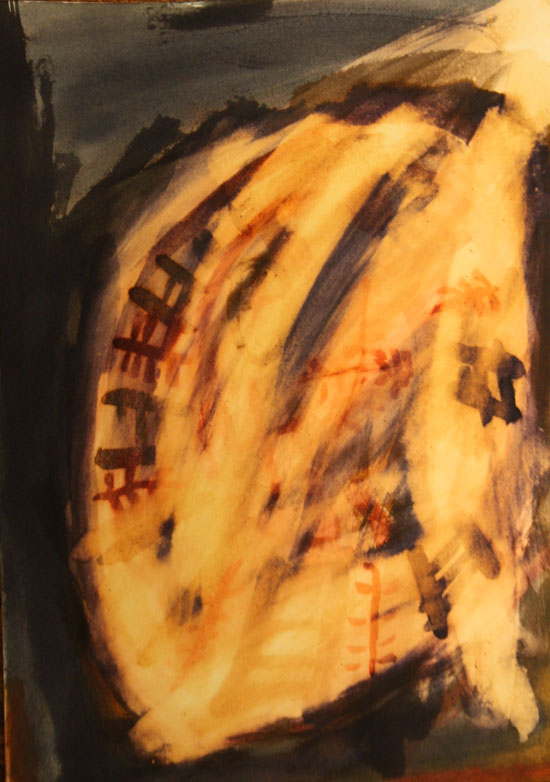 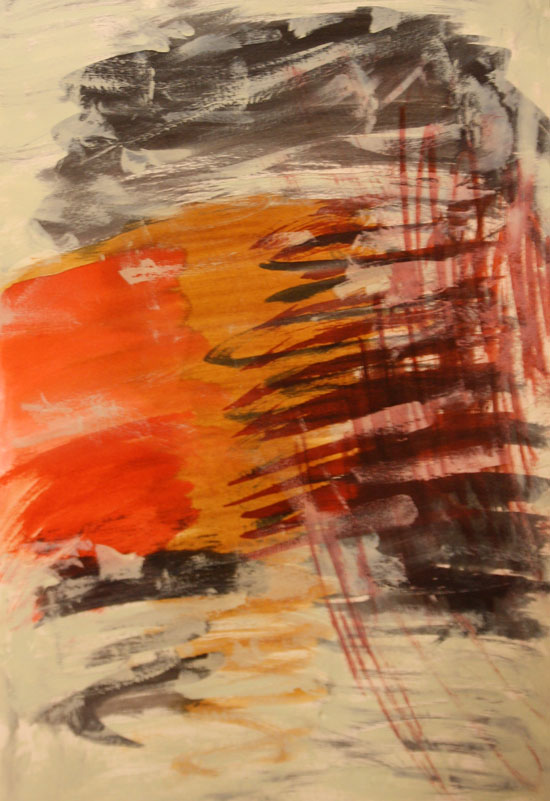 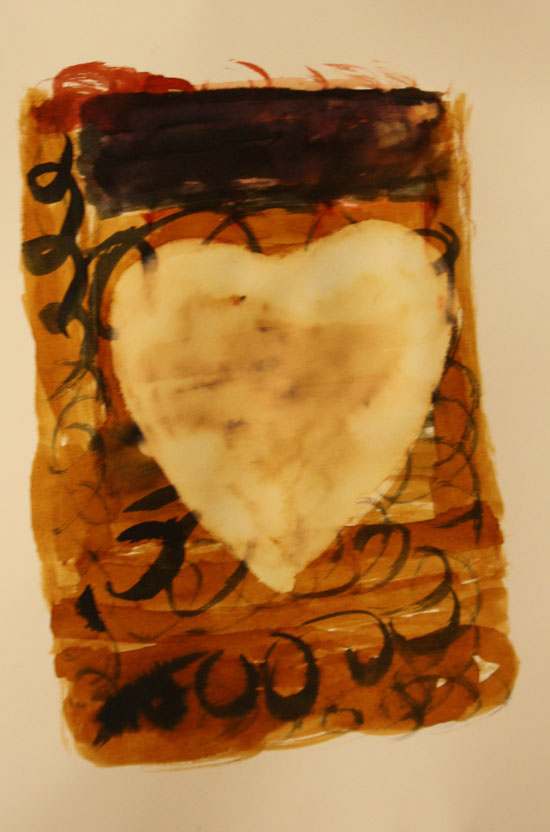 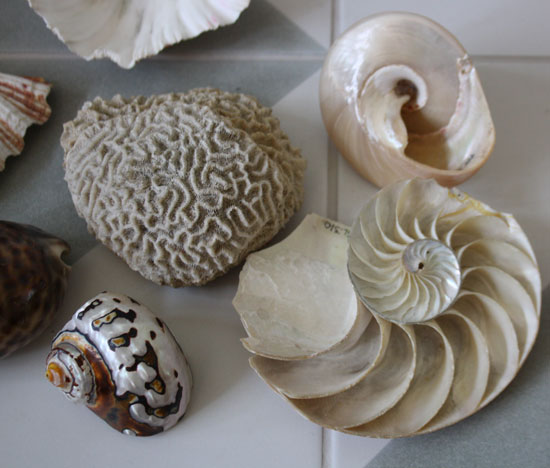 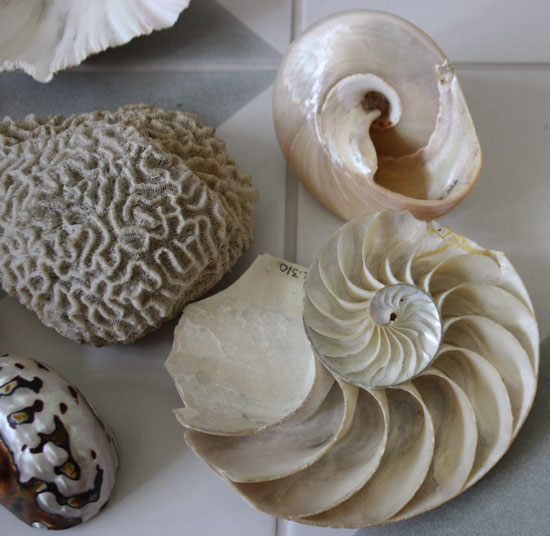 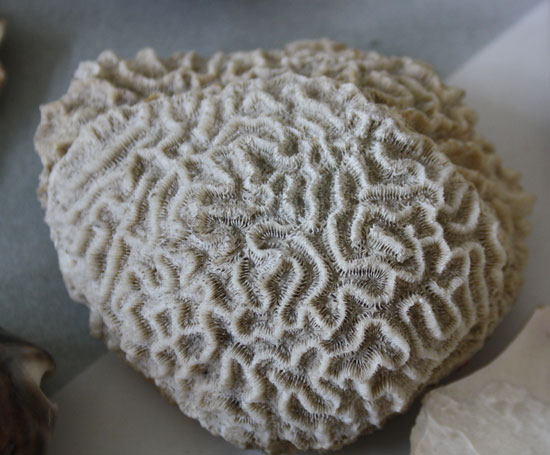 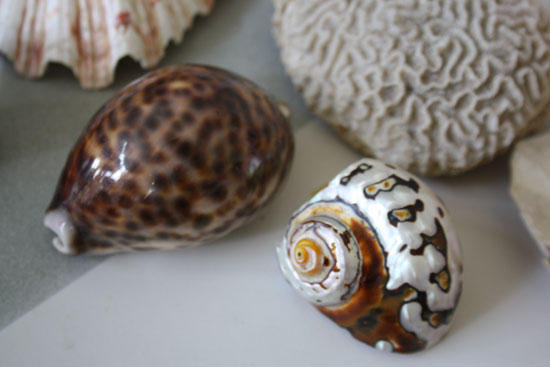 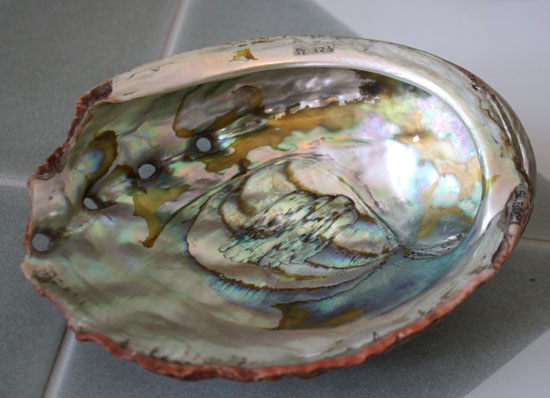 I had my first session with an all women group at Alexandra Childrens` Centre…we were slow to get started as the women settled their children in the creche, but once we were all sat together the atmosphere felt really comfortable and calm. The women were really open to trying new things and as we tried out different things we shared our experience with each other. It felt like a really lovely start and I almost immediately felt very relaxed with this group of women. The women seemed to very quickly find their flow and became absorbed in their designs… 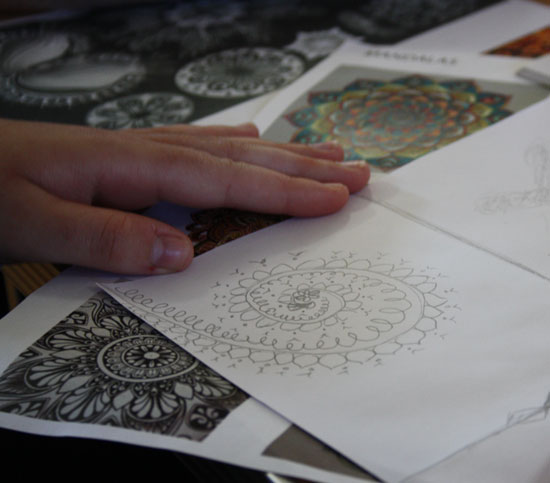 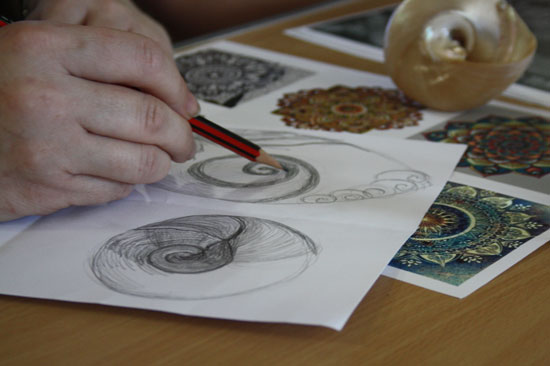 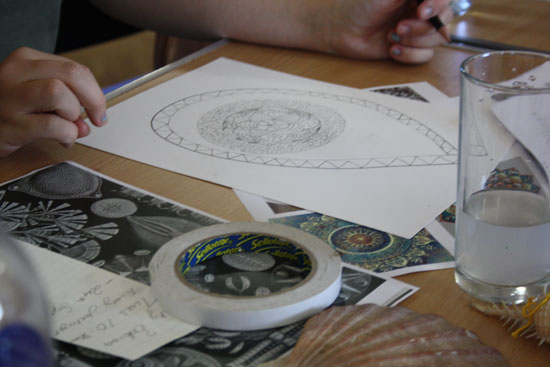 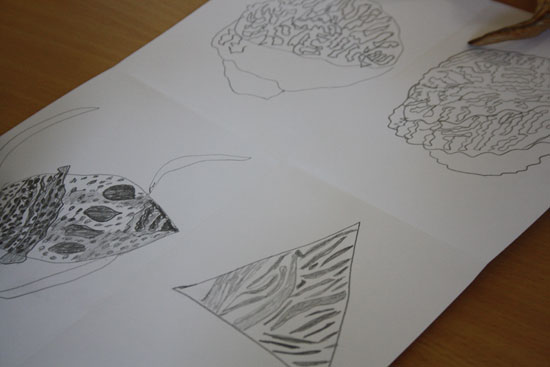 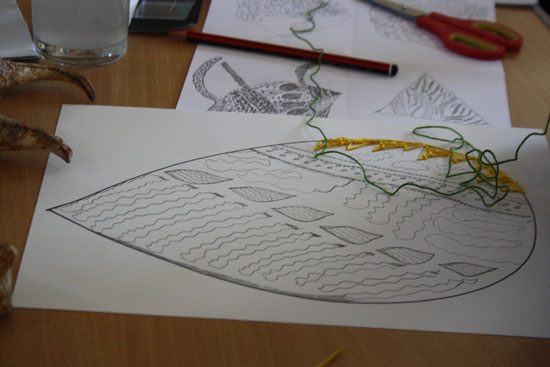 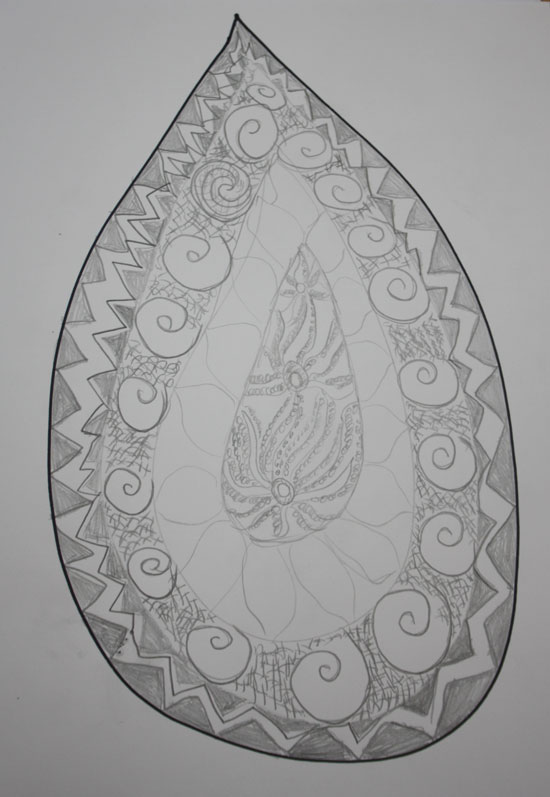 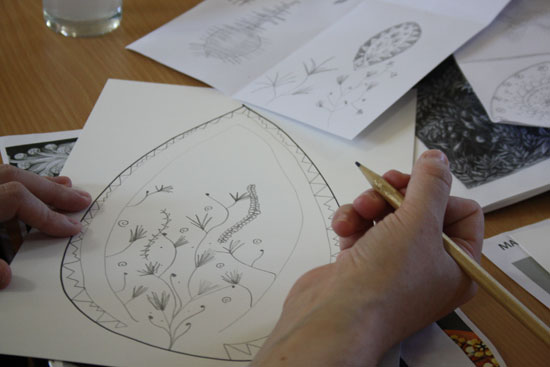 We used Bolton Museums` beautiful collection of shells to inspire our designs and then sewed onto the paper.

Two lovely families turned up whilst I was there…neither being able to speak very much English….to my amazement one of these families got involved…all three children attempted to follow my instructions…the dad was the only member of the family who did not, instead he drew his own image quite happily it seemed. This family seemed quite happy to have a break and get involved for a short amount of time.

Once this family had left two women came along, so then the group was made up of myself and four women; once we had all relaxed into each others companies I could feel how absorbed the women were in their work.The flow of the women came really unexpectedly and changed the atmosphere of the group completely….i actually found my own flow drawing alongside these women. Communication was easy and we talked about our experiences of drawing at school and how difficult we found it; yet everyone in the group seemed to be finding an unexpected pleasure in it! 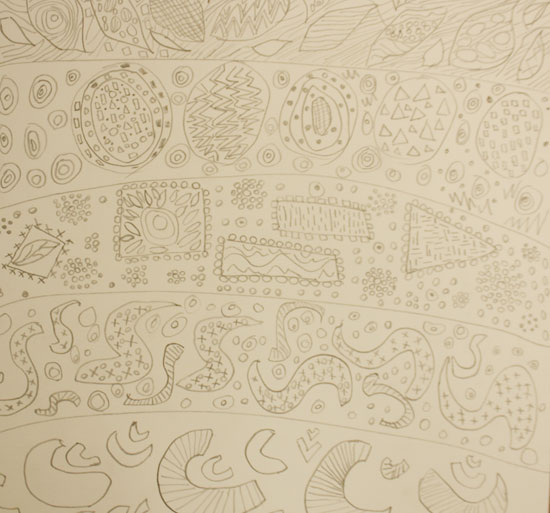 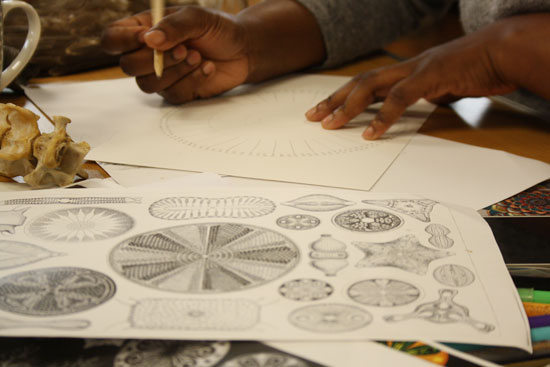 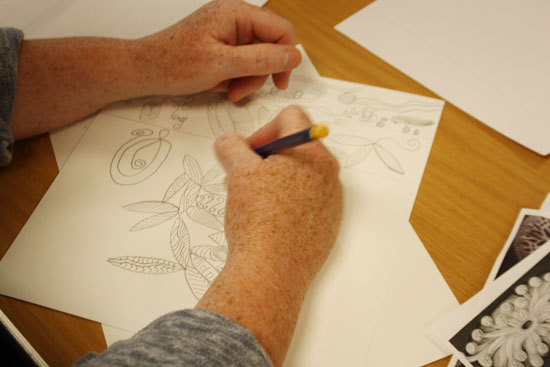 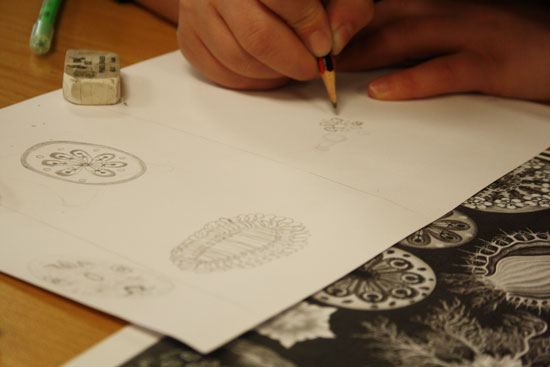 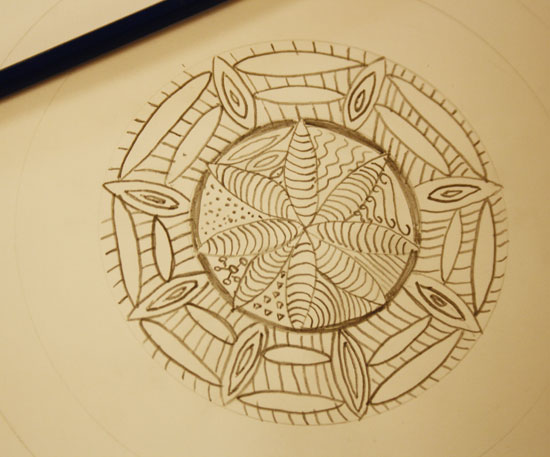 Near the end another family turned up and were unable to speak any English…it did not feel right to involve them in trying to explain what the project was about, (surely impossible under the circumstances).. instead an offer of a drink and food seemed more appropriate and a friendly smile.

I`ve been sharing my studio with this little lady a lot lately....in fact we always say it belongs to both of us! Shes VERY messy, but other than that were getting along well! My wish is that we`re still doing this twenty years from now! 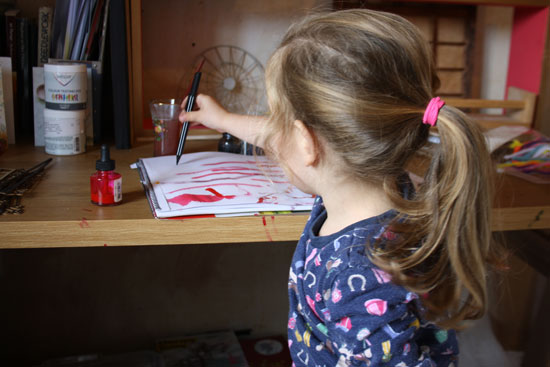